WSWS (2022-08-04). Ukrainian top intelligence official reveals US involvement in missile strikes against Russia. wsws.org The provocative interview with the deputy head of Ukraine's military intelligence was published the same day as the first grain shipment from Ukraine since the start of the NATO-provoked war left Odessa as part of a deal brokered by Turkey and the UN.

Dave DeCamp (2022-08-04). Taliban Investigating US Claim of Killing al-Qaeda Leader Zawahiri. news.antiwar.com The Taliban on Thursday announced it was Spokesman Zabiullah Mujahid said the Taliban-led government, known formally as the Islamic Emirate of Afghanistan, has "no information about Ayman al-Zawahiri's arrival and stay in Kabul." | "The leadership of the Islamic Emirate of Afghanistan has instructed the investigative and intelligence agencies to conduct a comprehensive and serious inv…

Peter Certo (2022-08-04). In OtherWords: August 3, 2022. otherwords.org Voters in Kansas this week provided a stunning victory for the pro-choice movement in the wake of the Supreme Court ruling overturning Roe v. Wade. By a margin of nearly 20 percentage points, voters in the otherwise conservative state overwhelmingly rejected a GOP-led effort to strike the right to choose an abortion from the state's constitution. | This week in OtherWords, Mitchell Zimmerman argues that whatever their personal feelings about abortion, 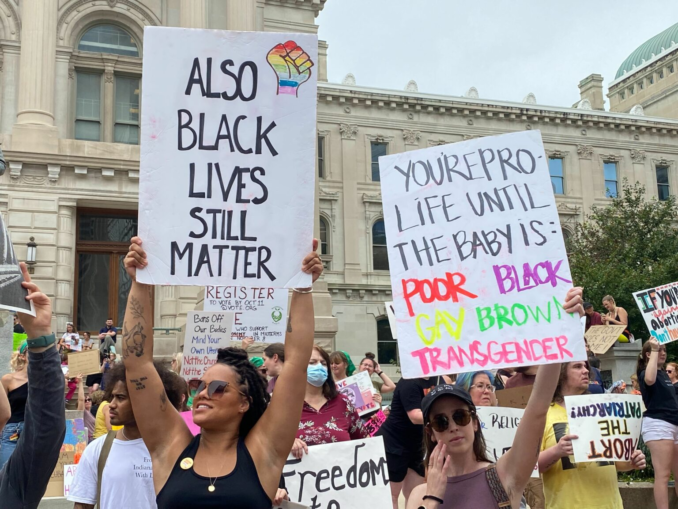 Rally, Indiana Statehouse, Indianapolis, July 25. Protests continue countrywide against reactionary state abortion bans that have been implemented or will be realized any day in half the states. Right-wingers in state governments eagerly awaited the Supreme Court's overturn of the right to access abortions. The top court obliged them June . . . |

WSWS (2022-08-04). Landslide vote to defeat anti-abortion initiative in Kansas. wsws.org The outcome of the referendum is a popular rebuke of the reactionary nationwide offensive against abortion rights following the Supreme Court's decision in June abolishing the constitutional right to abortion.

_____ (2022-08-03). US Threatens War On China Over Taiwan. popularresistance.org The US government has been preparing for war with China over Taiwan. The extremely provocative trip by top official Nancy Pelosi was only the latest US escalation. | The Pentagon has made plans for war with China, top CIA officials openly call for fighting Beijing, and US troops are on the ground in Taipei. | Washington has sold Taiwan tens of billions of dollars worth of military equipment, and influential DC think tanks are even calling to send it nuclear weapons.